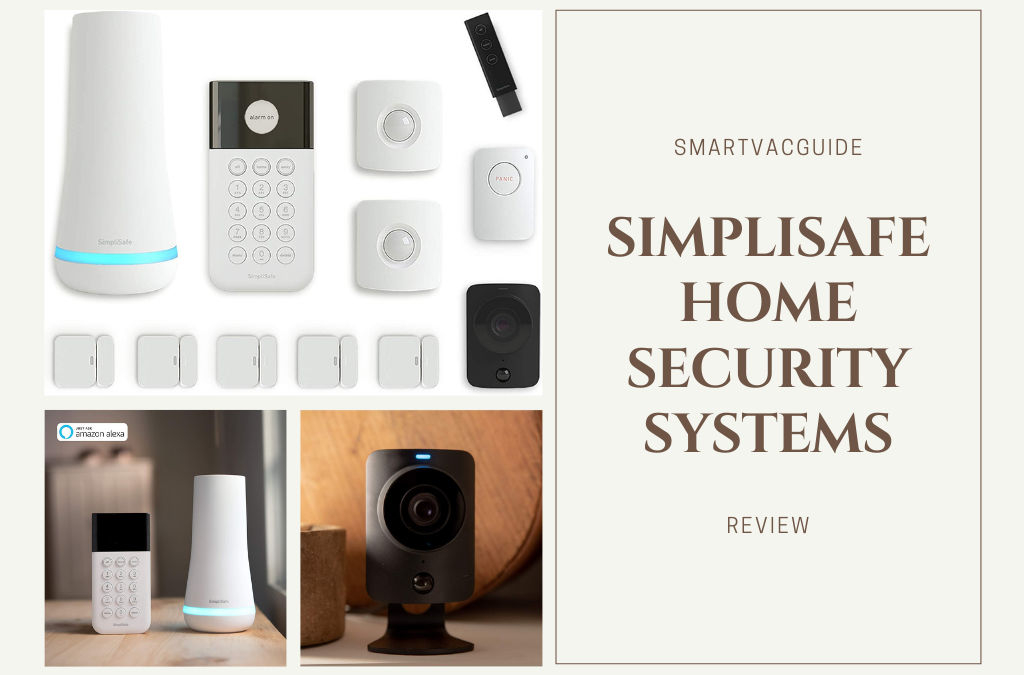 Are you worried about the safety of your home? If you answered yes to this question, SimpliSafe Home Security Systems might be the best option for you. This is basically a box solution that can connect a variety of different home protection devices to a single mainframe. As a result, you will use the same protection scheme for all of your requirements.

But before we go on to the review, let’s see how these security cameras work.

Security cameras, also known as CCTV cameras, are widely used to secure businesses and industrial areas, but have you ever wondered if they could also be used to protect your home?

CCTV is well-known for significantly increasing a property’s safety, so learn about the advantages of installing CCTV in your home and protecting your home and family.

Remote Monitoring for a Safer Home

One of the most significant advantages of home CCTV is the ability to remotely monitor footage and your home. Security camera systems like SimpliSafe Home give you remote access to your device through a safe internet connection from any laptop, tablet, or smartphone, allowing you to keep an eye on any operation from anywhere.

Provides Homeowners with Peace of Mind

CCTV will give you and your family total peace of mind knowing that you’ve gone above and beyond to ensure your safety. This is especially important when you are away from home or on vacation. Knowing that your home is being watched is a huge bonus that can help you decide if it’s worth it to invest in home security cameras.

Home CCTV cameras can also be installed around the perimeter of your property to provide visual access to any blind spots that can be seen without leaving your home.

Another great advantage is being able to see who is at your front door without having to answer it – a particularly useful function for the elderly and those who are more vulnerable.

SimpliSafe isn’t a well-known brand yet. It is, however, it is a well-reputed firm that has been producing security products for over a decade. The business was founded by Harvard students a decade ago after one of their friends’ houses was broken into.

As a result, they came up with a simple software solution that was simple to install and uninstall and didn’t require any lengthy contracts.

SimpliSafe Home Security Systems, the company’s new third-generation product, effectively realizes that vision. It’s one of the smartest, safest, and stylish systems for overall security, and it’s ready to install yourself.

Since they’re essentials, all SimpliSafe protection systems have the Starting Components — Base Station and Wireless Keypad. In their own ways, they are both used to monitor the entire SimpliSafe ecosystem.

To ensure that the SimpliSafe ecosystem works together, all of the equipment must be combined with its base station. In addition, the base station is in charge of acting on the data sent by the detectors and equipment.

The base station will emit a loud 95dB siren if there has been a break-in. If you’re curious, that’s around the same decibel level as a subway car, a wood store, or a food processor. It’s very loud, and you should be able to hear it from anywhere in the building.

In addition, the base station sends data to the user’s mobile applications. The base station will send a warning to your phone if a break-in or threat is detected.

The Wireless Keypad is a decoy that acts as a distraction. If burglars gain access to your house, the keypad will begin beeping loudly. This will attract the attention of the burglars, who will most likely break it to prevent the authorities from being notified.

The keypad, on the other hand, is just a gimmick, and the main device, the base station, will quietly function in the background to warn authorities, activate the alarm, and give you a notification.

When someone breaks into your house, a variety of devices are enabled. – one has its own function, and you can get them in any combination to protect your home.

The function of the Entry Sensor is to detect when someone enters your house. These are tiny devices that should be mounted in all of your house’s entry and exit points, such as windows and front/back doors.

The entry sensor must be connected to the door or window frame, and the entry/exit point must be magnetized. The entry sensor will be tripped if it moves over two inches away from the attached magnet, and the base station will begin to chime.

A motion detector/sensor is a system that can notify you when it detects motion. As a result, even if the burglar gets in without tripping the entry sensor, the motion sensor would be able to detect their movements and activate the alarm.

These sensors should be placed close to the main entry rooms, which are usually the living room and kitchen. Since these sensors can sense movement within 30 feet, they will be triggered as soon as intruders reach these rooms.

However, since they have a 90-degree field of view, you can position them in the corners of rooms for the best performance.

One of the most common ways intruders gain access to someone’s home is by breaking glass from windows. When glass shatters, the Glassbreak Sensor detects it. As a result, you should put them in rooms that have a variety of ground-level windows. You’ll be notified as soon as a burglar smashes the window to gain entry.

These are home surveillance systems that detect hazards such as fires, water leaks, temperature changes, and so on.

The Temperature Sensor’s job is to detect when the temperature in your home drops below 41 degrees. It will also provide you with hourly temperature readings of your home through a smartphone app.

Water Sensors should be placed near water sources such as sinks and toilets. This will allow you enough time to respond to the leak and prevent flood damage to your house.

In the SimpliSafe Home Security System, the SimpliCam is the most important and necessary burglary sensor equipment. It’s an indoor security camera, as the name implies. This is a hardwired WiFi-enabled camera that must be purchased in conjunction with the SimpliSafe package and monthly paid monitoring service.

Here are the following features that make you purchase Simplisafe.

The camera has a 120-degree field of view and records videos in 720p. As there are more modern cameras with higher resolution and a broader field of view, this is perfectly acceptable . A 120-degree lens angle, on the other hand, also leaves plenty of blind spots in the space that can be exploited by professionals. Furthermore, there are no zoom options in the video.

SimpliCam has a Night Vision feature that is activated automatically. As a result, when the camera detects that it is too dark to see, it begins recording with night vision switched on.

It allowed night vision by flashing a bright white light, rather than using generic infrared lenses. The white light shines brightly in an otherwise dark space. As a result, if there are any burglars in the building, they will be aware that they are being recorded immediately.

This can be beneficial as well as bad. On the one side, it’s possible that it would frighten them away. However, it can encourage them to break the camera.

Recommended for You: What Is The Best Home Carpet Shampooer – Deep Clean Your Carpet

SimpliSafe is a low-cost, easy-to-install smart security device that protects your home from intruders and natural disasters including fires and floods. It’s a well-designed device that accomplishes what it sets out to do: protect your home simply and flexibly while allowing you to control anything remotely with (or without) a monthly subscription.

The Panic Button is a critical piece of equipment. The panic button should be placed next to your bed, and preferably next to the beds of all members of your family.

When you press the panic button, an alarm will go off, and the control team will contact you to check on you.

If you don’t pick up the phone or don’t say the safe word, the team will call the cops. If you wouldn’t want the intruder to know about it, the panic button can be set to remain quiet.

A determined burglar can overcome even the best protection system. However, a security system should be sufficient to deter most opportunistic criminals. I hope this article has aided you in deciding whether or not to install SimpliSafe Home Security Systems to meet your protection requirements.

SimpliSafe isn’t flawless, and it has a few drawbacks, but it’s currently one of the most user-friendly all-in-one security systems available.

After a thorough review, we decided to give SimpliSafe a rating of 8.2/10.

Recommended for You: Best Bladeless Fans | Safe and Powerful Fans for a Cooler and Fresher Home